Home › Canadian Identity › Why the fear around “ethnic enclaves” and fewer White faces in Metro Vancouver?

Why the fear around “ethnic enclaves” and fewer White faces in Metro Vancouver?

If you are reading this on your handheld device, please sit down and put your device on a table, lest you drop it and break it.

Here’s the scariest news to come out this week: Whites will become the minority in Metro Vancouver in less than two decades.

If you have recovered from the jolt, let me walk you through the racially charged presentation of a demographic study, which is more shocking than the study itself.

If you read between the lines, it actually is a projection study by local geographer Daniel Hiebert for Citizenship and Immigration Canada. Mr. Hiebert is a geographer at the University of British Columbia and as the co-director of research and policy forum Metropolis B.C., he “has travelled the world studying immigration patterns”.

But reading the actual lines is what leaves a bad taste in your mouth, especially the “joke” that Mr. Hiebert cites in the Vancouver Sun news report published on April 01 this year:

One of Hiebert’s most stark predictions for Metro Vancouver and Toronto regards the increasing rise of ethnic enclaves.

“Answer: the Fraser River (which separates Richmond and Surrey).”

My journalist friend Bal Brach confirmed my worst fears in a Twitter conversation we had on April 02:

never heard “popular standing joke” about ethnic segregation. A bit suspect of some of the ethnic enclaves comments.

The Black-White racial segregation in the USA:

In Mr. Hiebert’s defence (I don’t know him), a researcher always comes in with a viewpoint into his investigation and builds or expands on his work against the existing available frameworks. Point noted. But why situate Metro Vancouver’s situation with the Black-White racial framework in the USA? Or against immigrant enclaves in Europe?

I am not implying that he has broken any law, but the situation of these frameworks is troubling. By situating the demographic concentration in Metro Vancouver against the Black-White framework in USA, what is being achieved or rather being said without actually saying it? I don’t get it.

And briefly on the Black-White framework in USA: first the White dominance enslaved an entire race and abused it. Then without exploring the framework of years of abuse and discrimination, the Black community continues to be projected in negative stereotypes. These stereotypes are fed into the public consciousness to mask consequences of discrimination as the direct fault of the Black community! A distressing example of victim blaming.

Even more disturbing is the frame in which the Sun story examined the Metro Vancouver projections.

Without declaring whether these demographic trends will be negative or positive for Metro, Hiebert nevertheless says the “scale of ethnographic change over (the next) period will be larger and more rapid than anything we have seen previously.”

It seems to suggest that a concentration of any racial identity in a geographical space can cause trouble. Or not. Yes or no, maybe, but there is the suggestion that it can lead to negative consequences. To me, the language of the presentation reads as if minority groups are going to explode all over metro Vancouver and the situation will spell disaster.

My question is: why? Why is immigration so scary? In the first place, for argument sake alone, immigration is allowed and legal. All these numbers and projections are coming from legit sources. What did you think would happen when you allowed immigration? That people won’t come? Or you wouldn’t notice them when they did?

Now when people from different countries are calling Canada home, why the numbers are being projected in a racially charged language? To begin with, isn’t it the Canadian department of Citizenship and Immigration stamping visas in India and China and around? So do you want immigration? Or do you not want immigration?

The bigger question is: Why are you instilling a sense of fear with these numbers? These numbers in themselves are pretty harmless and the mathematical projections are based on scientific data but the projection is that of a mind, a human mind that has created these divisions based on his/her own fear, the fear of the “Other”; the “Other” (read minority groups) taking over the dominant culture.

The fear of “ethnic enclaves”: 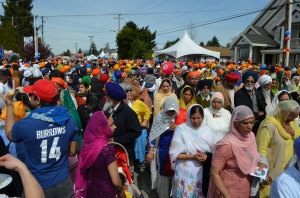 What exactly do you fear from South Asian heritage Canadians living in Surrey? That we will break into a riot and march on the streets of Metro Vancouver? Wait a minute. When Vancouver Canucks lost the Stanley Cup to Boston Bruins in 2011, why was the intersection of 72nd Avenue and Scott Road unusually quiet? Isn’t it the same South Asian “ethnic enclave” where traffic is brought to a halt and South Asian heritage Canadians break into bhangra to celebrate the victory of home team? Why didn’t the non-Whites of this racially segregated enclave burn cars, loot stores and create a nuisance? Uh yes, all that was happening in the downtown core, in the integrated open space. Why didn’t this “ethnic enclave” get a pat on the back post the riots? Why wasn’t a study commissioned to understand the calm behaviour of this racially segregated group?

There never is a discussion on the deeper meaning and complex framework of a community choosing to live together based on similarity of experience and lifestyle. In simple words: if you are going to keep projecting a racial and cultural group as an “Other”, as an “Outsider”, the group is going to come together for support, growth and harmony – as depicted during the Stanley Cup riots. There is nothing to fear.

I am all for integration, but define integration for me. People need services in their native languages, they need the freedom to practice their religion, and live in their cultural framework, there is nothing to fear people who do that. For the senior citizen who has just arrived from Mainland China or India, it is not only moral but progressive to have road signs in Chinese or Punjabi or even Hindi. (I support bilingual signs: native languages with English) That is how you integrate people: by allowing them to become independent and live the Canadian life. Isn’t that the reason people pay to move to this country?

To me personally, even more troubling is the definition of the dominant culture. As I have tried to deconstruct Canadian identity in my earlier posts, who is to say what is the dominant culture? The White argument always starts with: Canada was founded on English and French (White) identity and everything else has to exist and behave against this constructed “main” identity.

Here’s a piece of history in case you still don’t know or are in denial: Canada existed way before the claim of White dominance. It was (is) the sacred land of Aboriginal Peoples. The foundation of thousands of years of Aboriginal civilization, culture and love (not dominance) cannot be wiped out by the 500 odd years of White Settler dominance and its residential school legacy.

Canadians of South Asian heritage started to call Canada home around 200 years ago – not as immigrants but as British subjects from pre-partitioned India that was still under colonial rule. And then there are extended history chapters on Komagata Maru and Chinese head tax, but I am not going to go there, today.